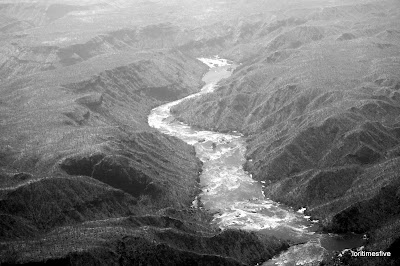 I want to thank Janet for reminding me that I'd left out a part of our recent trip to Africa, one of the wonders of the world,

When describing the majesty of the falls, I think
Dr. Livingstone came close with,

'on sights as beautiful as this,
angels in their flight must have gazed'. 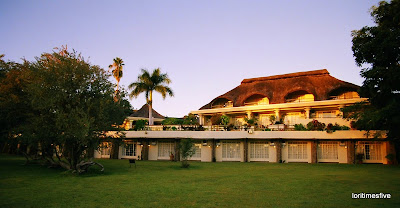 Our safari began in the town of Victoria Falls,
here at the ilala Lodge, which faces the falls,
and is just a short walk away...

It was hard to get a good photo, but from here you can see the spray rising up between the trees, and hear the thunder of the water, even before making your way down the path to the rim... 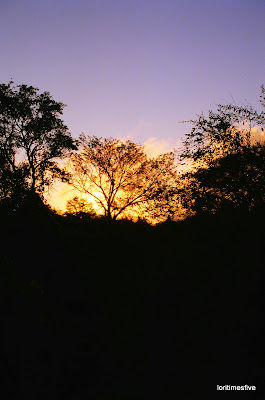 Sunrise over Africa,
highlighting the mist from the falls. 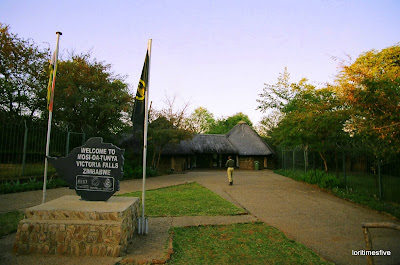 Welcome to Mosi~oa~Tunya or Smoke that Thunders. The first known name of the falls was Shongwe, given by the Tokaleya people. Later, the Ndebele changed the name to Amanza Thunquayo, or Water Rising as Smoke. When the Makalolo arrived it was changed yet again to Mosi~oa~Tunya. And finally when Dr. Livingstone was brought to the falls in a dugout canoe on 16 November 1855, he renamed them in honor of the queen. To me, it's so spectacular, it deserves four names, at least. 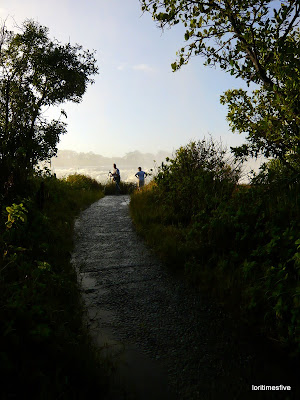 Once inside the park you'll find a network of tracks, meant to preserve the fragile rainforest ecosystem, and to take you to a series of viewpoints. 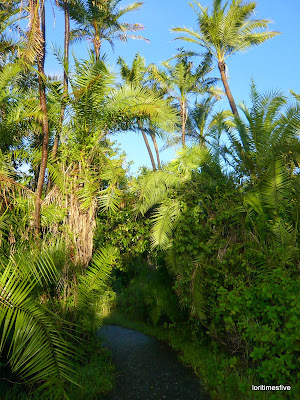 There are flowering plants, ilala palms, ebony trees and ferns, birds and monkeys. We stepped carefully on the wet stone foot path all covered in moss, sometimes ducking under branch's, that dripped
raindrops on our heads and backs. 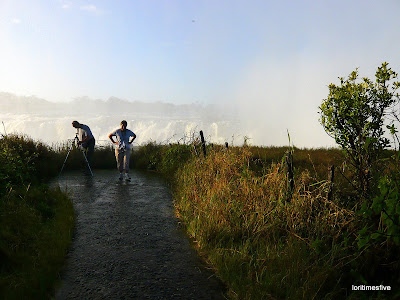 We were advised to wrap our cameras in plastic bags, the flow of water was at it's height, the flood stage happening between March and May with the water at its greatest between April and June. About five million cubic metres per minute pass over the falls.

Your going to get wet. 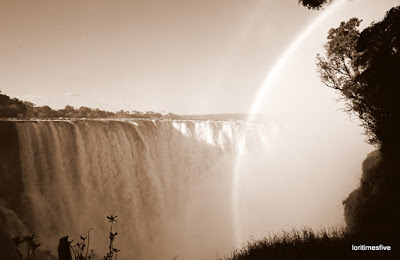 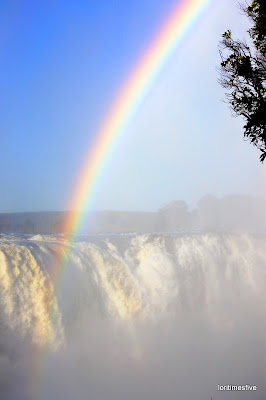 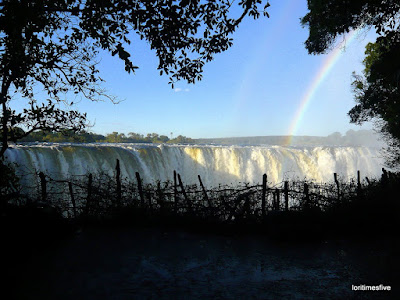 Giddy as children playing in the rain, we quickly got our bearings and began to check out every viewpoint. With names like Cataract View (Livingstone Statue is here) where you were meant to climb down a steep rock stairway into the gorge (didn't happen, too much water!) and Danger Point, covered with soaking and slippery moss covered rocks only to look out over an unfenced sheer drop off.
Frightening and stunning. 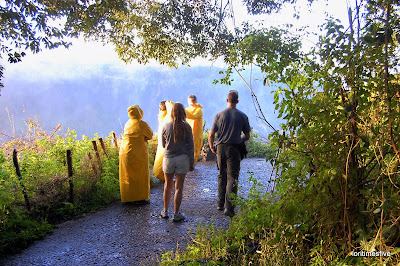 Some tourists chose to wear protective rain gear.
We wanted to experience it all,
including the getting wet part... 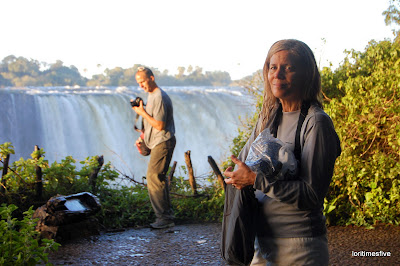 ...and we did that! the only thing dry in this photo is our
cameras. Just barely. We were not prepared for the amount of water... 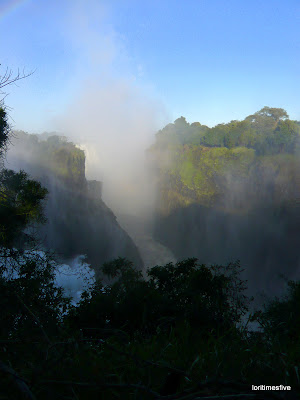 ...every photo here was taken on the same day in a period of a couple hours, you can see there are many moods of
Mosi~oa~Tunya... 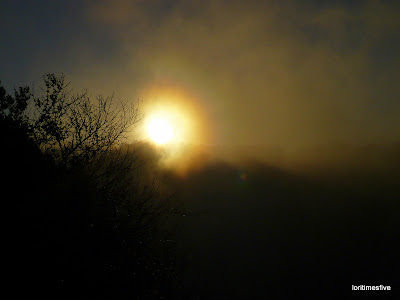 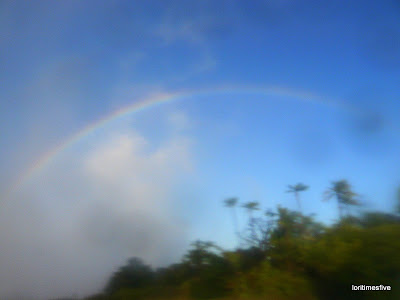 I think I liked the rainbow mood best. 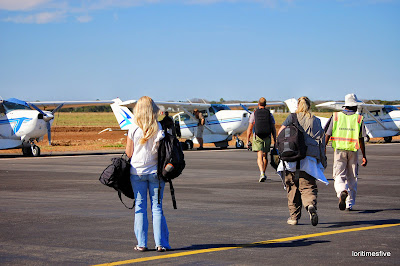 Now we are leaving. This is part of Victoria Falls airport. We asked our pilot if he wouldn't mind taking a turn around the falls so we could
have another look, an aerial look. 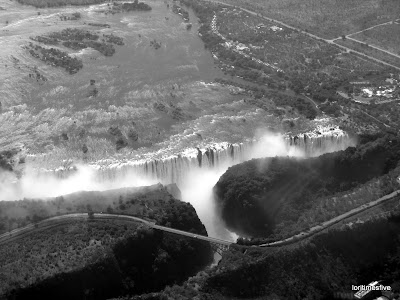 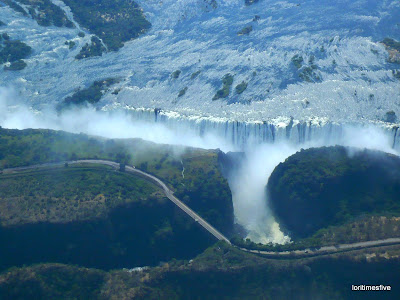 Here you can see the Zambezi bridge, on the left is
Zimbabwe and on the right, Zambia ... 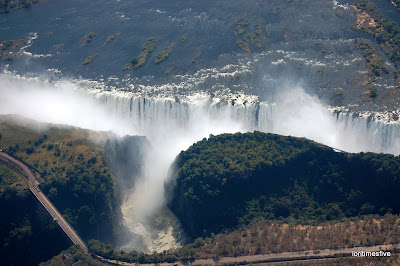 now you can really get a good look at the
amount of water flowing... 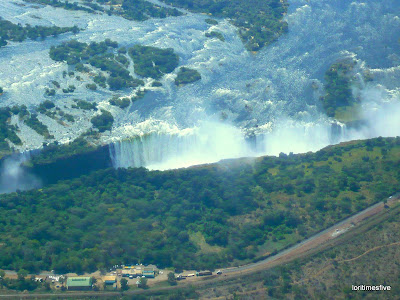 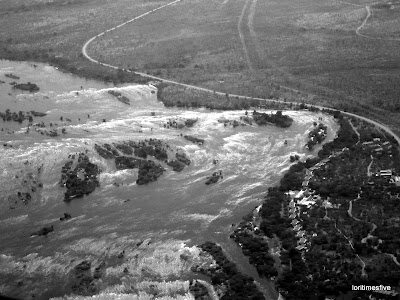 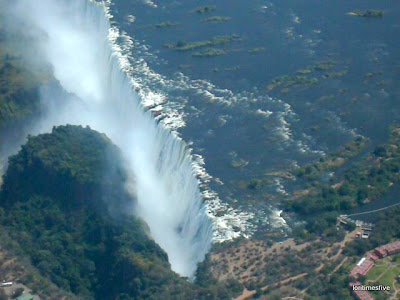 Victoria Falls is 1.7 kilometres wide and drops between
90 and 107 metres into the Zambezi Gorge... 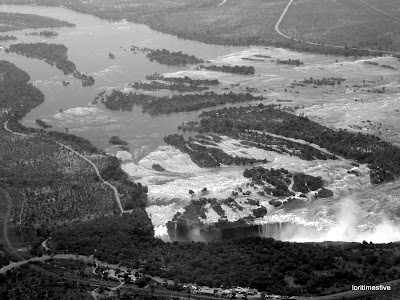 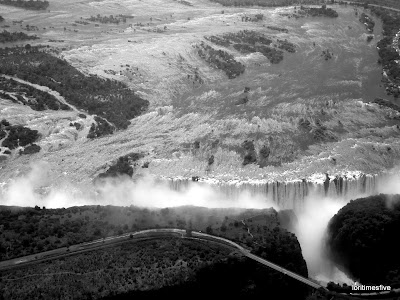 an average of 550,000 cubic metres of water plummet
over the edge every minute. 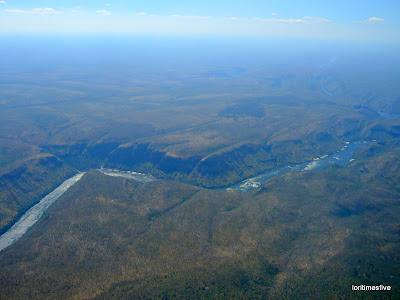 As we fly away, the Zambezi is heading for the falls... 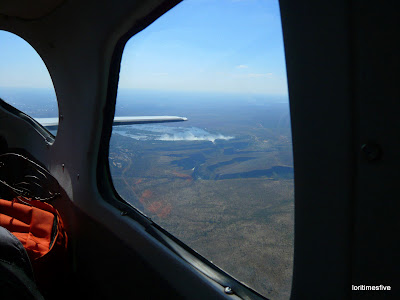 The Smoke that Thunders can be seen from
miles and miles away.

I hope you will get a chance to see for yourself this great
natural wonder of our world. Till then,
It's been my pleasure bringing you along with me.