"Wine is sunlight held together by water "
~ the poetic wisdom of the Italian physicist philosopher and stargazer, Galileo Galilei 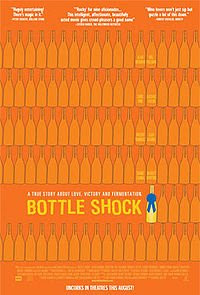 Have you seen this movie? It made me laugh and I learned a thing or two so I thought I'd share with you. It starts out with this quote by Galileo spoken by Alan Rickman (Love Actually) as the camera pans over California's Napa Valley. A good beginning for a movie if you like wine and true stories. And wine.

Bottle Shock is a 2008 film that tells the story of the events that led up to the Judgment of Paris in 1976, when California wine beat French wine in a blind taste test. It stars Alan Rickman, Chris Pine and Bill Pullman and is directed by Randall Miller, who wrote the screenplay along with Jody Savin and Ross Schwartz. It premiered at the 2008 Sundance Film Festival.


Sommelier and wine shop owner Steven Spurrier, a British expatriate living in Paris, concocts a plan to hold a blind taste-test intended to introduce Parisians to the quality wines coming from elsewhere in the world (and save his business in the process). He travels to the not-yet-famous Napa Valley in search of contestants for his Judgment of Paris taste test, where a chance meeting introduces him to floundering vintner Jim Barrett of Chateau Montelena. This twist of fate and the resultant oenological epiphany forever change their lives along with that of Barrett's son, Bo, as well as the fortunes of Napa Valley wineries and the global wine industry as a whole. (courtesy of wikipedia.)

"Bottle Shock" is a term that describes what happens when a wine travels from place to place. Although this movie is a true story, according to some of the reviews I've read, it was loosely translated. For more of the facts here is the book that inspired the film:

Judgment of Paris: California vs. France and the Historic 1976 Paris Tasting That Revolutionized Wine (Paperback)
by George M Taber

I thought that there was so much to enjoy about this film. It was entertaining, fun and my favorite, a feel good movie! Alan Rickman alone is worth putting it in your Netflix queue, and oh that Napa Valley!

With wine and hope, anything is possible.
~Spanish Proverb~