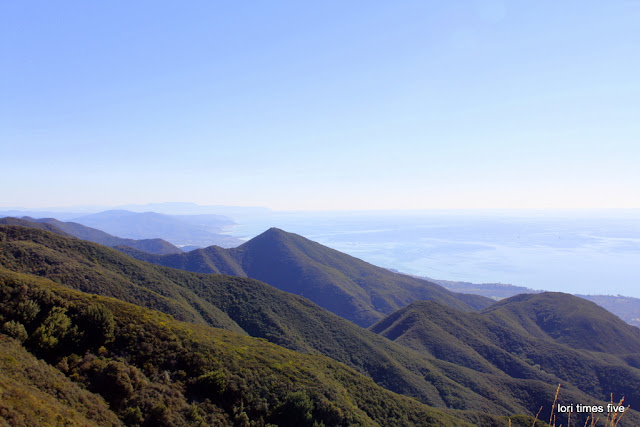 ﻿here we go, up up and up, to the top of the santa ynez mountain ridge. my sister lindy and i drove up saturday morning. it took us an hour from my home which is waaay down below on the edge of the pacific ocean . i live about center and straight down next to the sea, on the other side of the middle  peak. 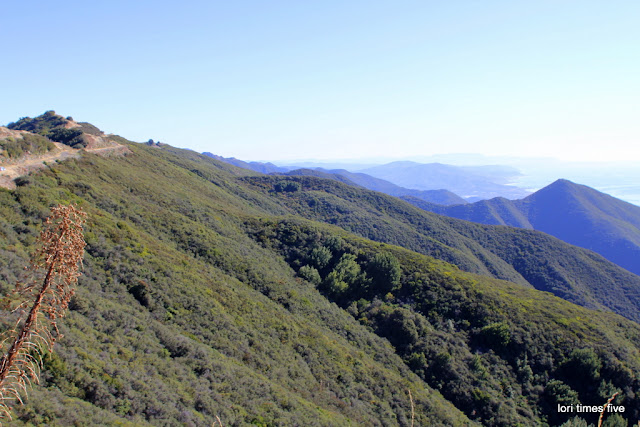 we are driving up here to see chuck, my husband. he is in an ultra run. a fifty mile trail run. the run is on the back side of this ridge we're on. looking at this photo the ocean is on our right, the back country on the left. he is in the back country. along with seventy two others. running fifty miles. 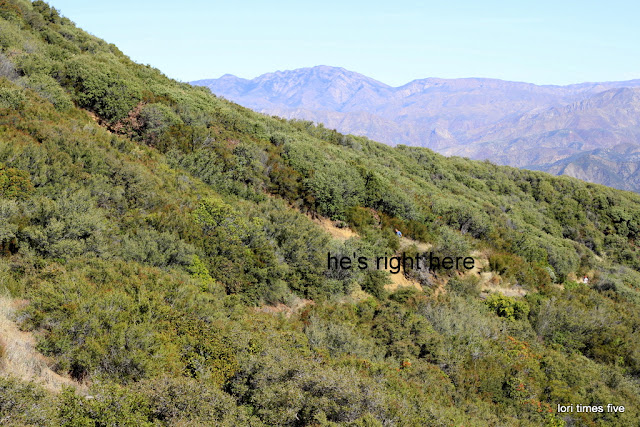 we are at one of the check points now. behind me is a makeshift tent with supplies for these endurance athletes. we waited (a bit anxiously) for chuck and cheered as each person came through. then, we saw him. he's that blue dot right above the words on this photo. notice the rugged back country from where he's come. there are a lot of hills. 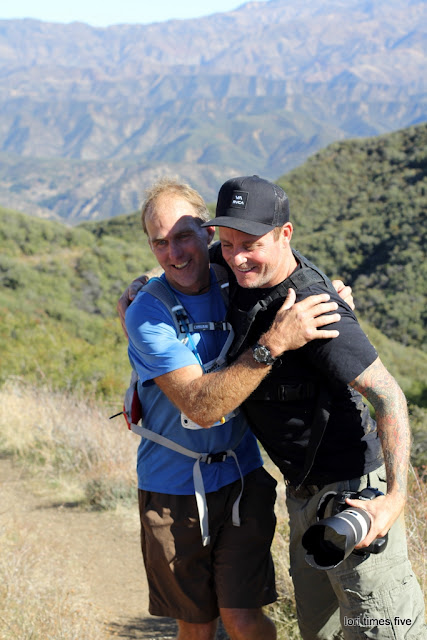 he was so happy to see his friend and fellow athlete. 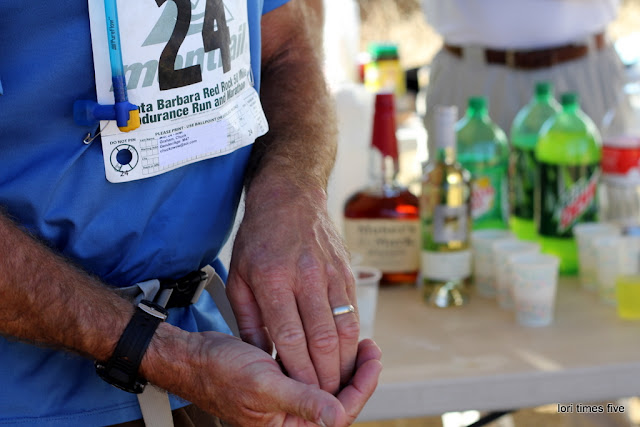 now he has to replenish before heading back out. there are foods with potassium and salt. and if you think you see a bottle of maker's mark whiskey on the table, you'd be right. some of the runners might need it i suppose. (i'm quite sure i would).﻿ 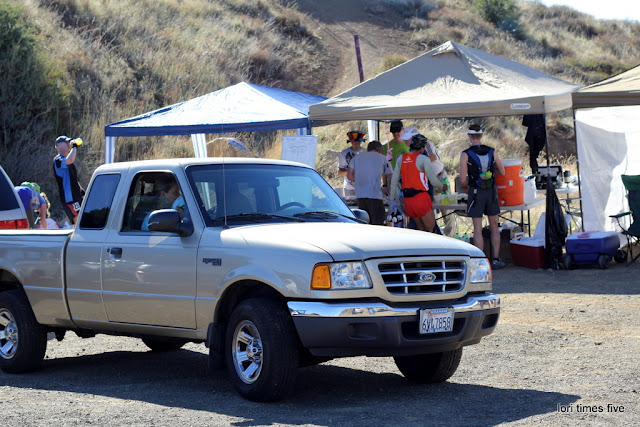 this is the check point we were at, i think there were at least five more throughout the course. i am always in awe of the people who volunteer their time to help. my husband appreciates it very much. everyone is so nice and supportive at these things (they must all be bloggers) ((bloggers are the nicest people on earth)). 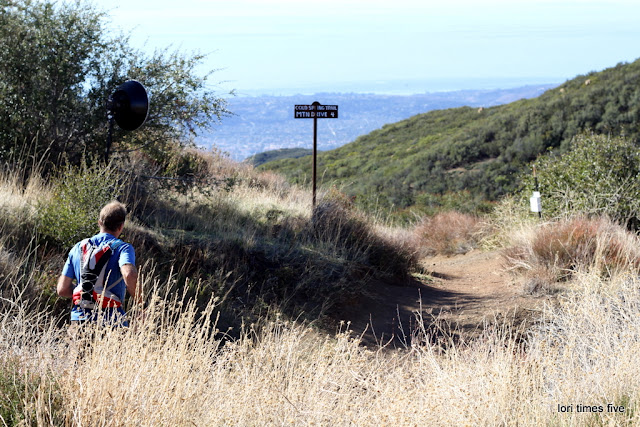 he was with us for five minutes before heading back out. can you imagine finishing a marathon and beginning again? and on a trail too? 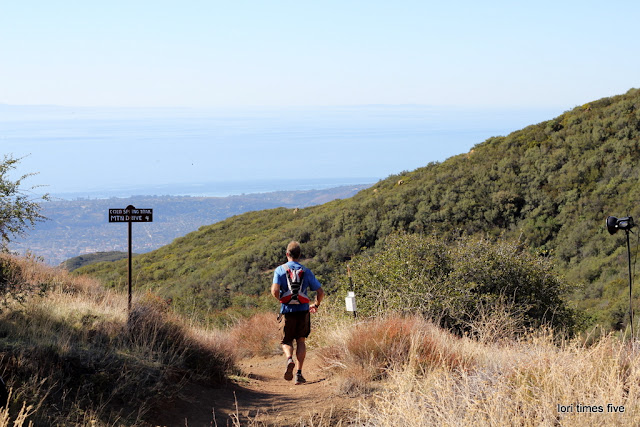 see you tonight honey. have a safe trip. lindy and i watched him run off and then headed back down the
mountain. we had a day planned. which thankfully didn't include any running. 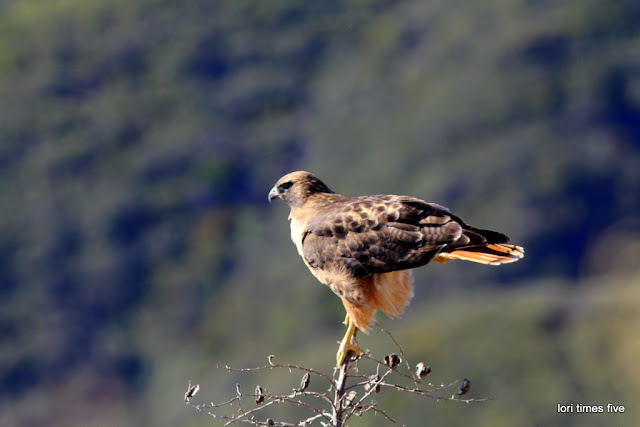 as we were driving down the narrow windy road﻿, this red-tailed hawk suddenly burst out of the bushes to our right ( there was shrieking) (by us) flying almost into our car, swooping over the hood and then as if we were in the wildwood book, he soared only inches from the ground, right directly in front of us! and then, suddenly again, he made an immediate stop and an abrupt turn into the brush on our left, attacking (scaring the wits) out of a small bird. the bird flapped his wings madly and flew straight up and away and the hawk, seemingly satisfied with himself landed on the top of this small dead branch. and stayed. i was shaking whilst trying to raise my camera, i've never been this close to a red-tailed hawk ever. i counted to three as he looked at me, raised his tail to poop (which indicates flying is next) and then he was off. 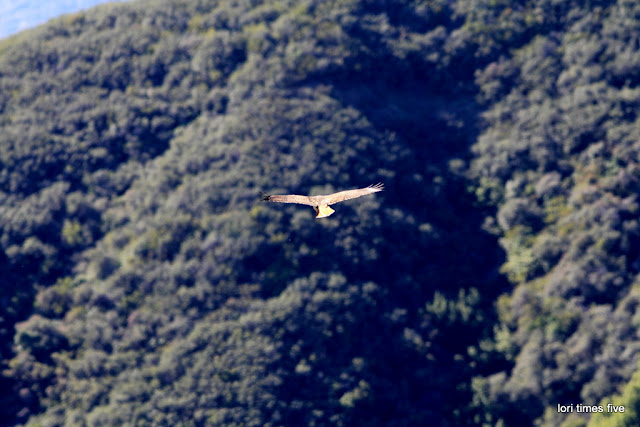 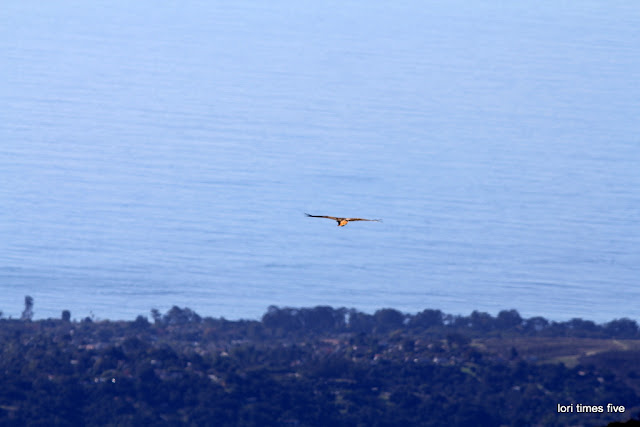 i wished for a moment wildwood were true. i would have asked him to keep an eye on my love. 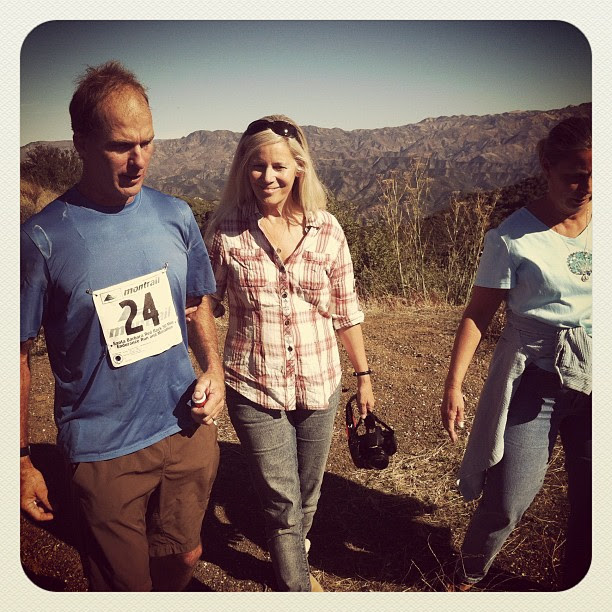 ﻿chuck and i and my sweet sister lindy. photo courtsy of  kevin steele. for kevin's images of the run
go here. (chuck's photo is the first one, he's wearing his handknit hat, a purl bee pattern.)    :)

oh! lindy and i had a fabulous day, we went to a holiday fair, shopped, and played with owen (i only glanced up at the mountain once). chuck finished some time after eight p.m. and walked in the door at nine o five, after fourteen hours of (torture) running. and although he's tired now, i know he'll do it again. if your reading honey, i'm proud of you. and i forgot to ask, did you see a bold red-tailed hawk?
Posted by Lori ann at 9:00 PM