a state of emergency- Friday update 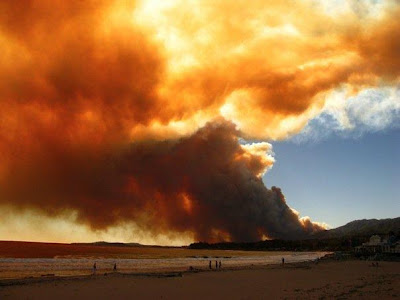 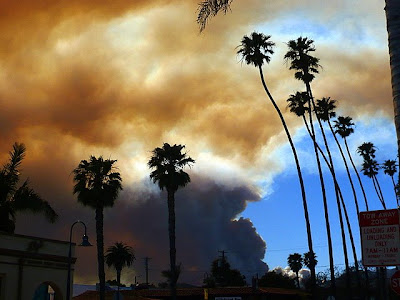 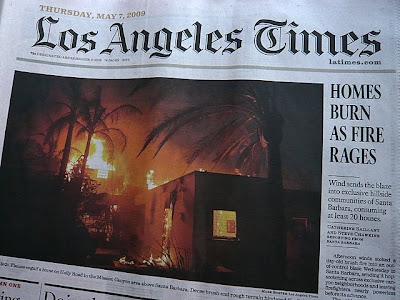 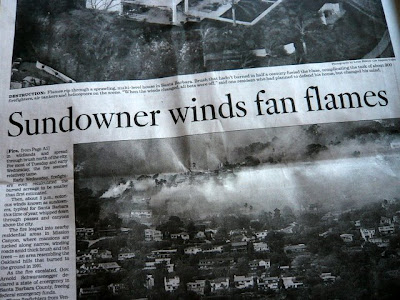 Suddenly we don't feel very good about leaving. Another devastating wildfire has come to Santa Barbara, this is the third major wildfire in nine months. Yesterday was exhausting, the heat overwhelming, our temps were in the high 90's and the winds, those notorious winds, whipped the flames through passes and canyons and into residential areas.

When the last bit of blue was covered in an orange red haze the energy changed completely. People came out of their houses standing together watching, silent. Power was out most of the day, even cell phones. That complicated things,everyone was trying to find out information, road closures, evacuation areas. It seems like everyone knows someone who needed help.

I was standing outside my work when my daughter drove up. Her ex was going to pick up the kids for his day. I don't know why they'd chosen this place but I didn't have time to ask because I was more worried about my 2 grandbabies. Their little faces were hot and flushed and worried! My daughter had gotten them frozen yogurts to cool them down and it did help. But I remembered a trick from when my kids were little, I found two cloth napkins and soaked them in cold water. I showed them how to wrap it around their necks or drape it over their heads or even wipe their little faces for comfort. They liked this alot. Whew.

Then their Dad drove up. He lives in the direction of the fire. My daughter begged him to reconsider letting the kids stay with her, where it is safe. He insisted it is HIS day and he can take care of his own kids. So they drove off heading towards that big smoke. While the two parents talked I reminded the children to use their napkins. They both smiled and nodded yes. My daughter was on the verge of tears and I honestly can't say what I was feeling. Helpless. That's it, so helpless.

Almost exactly a half hour later I got a phone call from my daughter, she was out of breath, the Dad had called he was just ordered to get out, his entire neighborhood was under immediate evacuation. She could hear Sadie crying in the background. I said I'd be right there to go with her and she said she was already on the freeway, almost there. She'd decided to go up and get the kids anyway, she wasn't going to listen to him. She told me when she got there the school across the street was being used as a helicopter landing pad and the noise was deafening. What a scene that must have been. Luckily the Dad agreed it was best the kids went with their Mom and they all got out of there safely.

We spent the night waiting to see if our help was needed, either from family or friends or The Red Cross. We are asked not to come out unless we get a call. My husband is certified in First Aid and CPR and I am certified with CERT, Community Emergency Response Team. My phone is registered with reverse 911 , so we kept checking emails for any new news.

As devastating as it is, houses are just houses, but the people, all the brave firefighters and the helpless animals are what I'm praying for right now.

May 8, Friday morning update- Thank you Everyone for all your prayers and wishes, I don't have the words to express what this means to me. Thank you.

Last night was surreal. To quote officials, " All hell broke loose". The fire has spread on all perimeters. 18,000 people were evacuated last night, that's in addition to the thousands that are already out, now over 30,000 people. This morning 6,000 more are being evacuated in Montecito as the fire moves southwest. Redcross shelters are at capacity.

We watched the fire all day yesterday, one eye on the news and another on the smoke and flames. After work we all needed a break so my Husband and son went for a surf. I went to the pool to swim laps. We planned to meet for dinner later. Sitting there at the restaurant trying to talk about something other than the fire, I looked at my phone which was blinking away. I had it on silent (always at restaurants) I had 4 missed calls. My daughter. Oh, she'll have to wait I thought, she calls all the time. Then a text came : CALL ME NOW!!!!!!!!!!! So I did. She was near tears, there was an extreme emergency that had developed right in the time we were away from the news! A firestorm had appeared on the ridge right above Chucks parents! She said Call Them, They are evacuating that whole area immediately. OhMyGod. I call and hear my sweet Mother-in-laws voice, all calm and unaffected. I am trying to tell her what I know and to leave now. Chuck could not wait for my reasoning, he took the phone from me and Shouted to his parents LEAVE NOW. They were waiting, like so many, especially the elderly, for the knock on the door, or a bullhorn, a formal invitation to go. But officials were warning over and over, that may not come, in most cases will not come, you are on your own. They tell us, if you feel threatened, Leave. And if you plan to leave, go early. So you won't get trapped. They said they'd go north, they would call us when they arrived at their hotel. It was slow going, we waited, picturing them driving alone, each in a car, packed to the brim with their belongings. Police escorts down the hill, barricades, traffic exodus out of town. We finally got the call after 11pm. They were safe.

This morning the fire marches on.

Labels: life, nature, where we live