they call it june gloom, the fog that hugs the coast here at this time of year. the world is all shades of gray for most of the day. all except my red red roses. there is a sweet story behind these flowers that i've been thinking about, and it goes like this...

once upon a time, there was a boy and a girl (who were actually quite grown up, but were feeling like kids) as they planned their soon to be wedding. the event was most uneventful, in that there would be no fussing or stressing, on that they both agreed. they decided together, every last bit, except he wanted to choose the food and she the flowers. he chose mexican and she chose Rose Story Farm. it was the one indulgence, these gorgeous old fashioned and antique variety organically grown roses. after many delightful trips to the farm the perfect flowers were chosen, fair bianca (ausca) a heavenly white~creme~blush rose. because they had to stick to budget (even in fairy tales) only a certain number of these gorgeous potted rose bushes (and bouquets) were ordered, the remainder of flowers would be provided by farmers market. 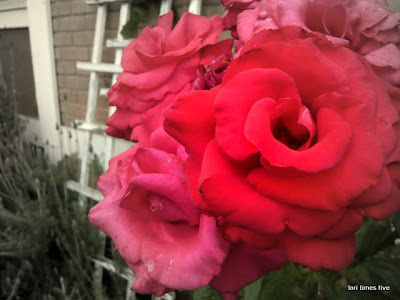 day of wedding~the house was full of family and friends, everyone doing something to help, the time is almost here. the girls were drinking mimosas while putting on their makeup and dresses, she alternating between utter calm and giddyness. the eldest son, had a very important job. his job was to set the rosebush's in place along the walk to the wedding place, with a hand painted sign stuck in one, directing the guests. so he smiled and dashed out the door, with his new girlfriend on his arm, to take care of his v.i.j. (very important job). 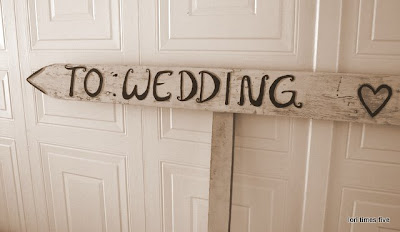 hours later~ not really, it only felt like it to the girl, her eldest son came back. beaming with joy and a sense of accomplishment, he said the job is done. the girl was thrilled, since she really loved the flowers of the fair bianca best and this was really her favorite part, the flouncy flowers and the sign and all.
but...her son said...there was a problem. the flowers were not there. he said we looked everywhere and your roses were gone. (small panic feeling here). but...he said, we fixed it! he said he and his girlfriend raced over to a nearby nursery and purchased a new rosebush. a red one. and when he said this he was telling her (me) that they looked at every bush and chose the most beautiful and most best and that he was sure of. and while he was talking she was thinking a million thoughts, like first how she hated red, maybe hate is too harsh, but red is not a favorite. and how her dream of billowy creme roses had suddenly disappeared two hours before her wedding. 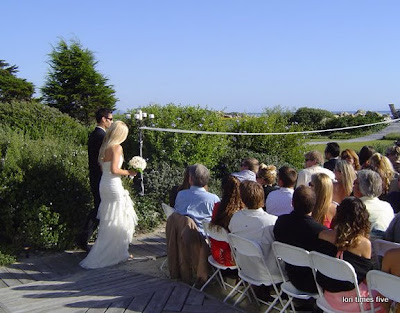 but mostly her thoughts were of her son standing there in front of her, wanting to please her, he'd done so much, driven all around, looking and searching and choosing and not to mention having to buy a new rose bush with his own money. and at that moment instead of feeling like crying, she beamed back up at him and told him how much she loved him and how grateful she was for him and mostly how very much she loved... 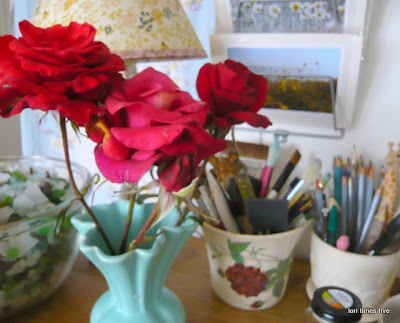 
p.s. if you're wondering whatever became of the fair bianca's, it seemed that the kind and generous owner of the home we were married at, had not only left us with the keys before she took off for a fishing trip in patagonia, but she also left instructions to her gardeners to polish up the place before our big day. when the gardeners found the rose bushes in pots they did what any good gardener would do, they planted them. which we didn't see until the following day when we went back to clean up, and then had a good laugh.
and so my fair biancas live happily ever after at the home we were married at, and the red roses are happy here.
Posted by Lori ann at 8:38 AM

Labels: Family, House and Garden, life, love, where we live