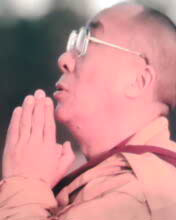 This is the day 2 years ago that I had the chance to meet His Holiness The Dalai Lama.

I shouldn't say meet, but rather be, in his presence. I was lucky enough to get a ticket to an intimate setting and I did this alone. I still don't know why it was so important to me to do it this way, I didn't tell anyone I was going until the day.

Most of my adult life I'd wished to meet The Dalai Lama and Desmond Tutu, both recipients of the Nobel Peace Prize, 1989 and 1984 respectively.

It's hard for me to talk about the meaning this brought to my life, no amount of reading, studying or practicing Tibetan Buddhism prepared me for the soul shaking LOVE I experienced on this day. It's hard to put it into words, in fact, I hardly talked at all that day. I think I just wanted to keep hearing his voice in my head.

And nothing else. I wanted to make sure it was permanently imprinted in my memory so I would be able to recall for the rest of my life...his voice, his message...after all I was sure this was my one chance...and I got my wish.

This time it was just luck.


Here is what happened. I went to Germany to visit my good friend Anja. I met her and her husband, Christoph, 5 years before here in Carpinteria. They were on vacation and I was running the Beach Store/kayaks for the City of Carpinteria. I helped them with their boats, they thanked me, we had an immediate connection ( i found out later they were Buddhist), we exchanged email/addresses and stay connected.


So... I finally got to Germany to see where they lived and meet their new daughter Mila. Anja said to me You know the Dalai Lama is in Germany. She said he is about an hour away in Munster. It is too late to get tickets, she said they tried but they are all sold out. She said to me, would you like to go anyway and just try. Just be there. I said YES. Maybe we could get a glimpse of him as he was leaving the building.


So we drove to Munster. On 21 Sept. It was a big place. Alot bigger than the place I saw him before. We didn't know where to go so we found a security guard and asked him. He pointed there. We asked if we could go in. He said "Nein" no chance. So we looked for another way in. We saw another entrance with 2 more guards. We approached them with the same request. But this time it would be me asking. Anja reasoned that maybe they would take pity on me knowing i had come so far from America. So i made my best sorry expression and walked up to the guards. They were ever more serious. "NO.NEIN!" they said. So we said thank you and walked back outside.

But we refused to leave. yet. There were posters of the Dalai Lama on a glass wall and I tried to take a photo of it but couldn't. So Anja walked back in and asked the same guards if we might have the poster. I think he felt sorry for us because I watched Anja and the guard walk over and took the poster down. I was thrilled when she handed it to me. 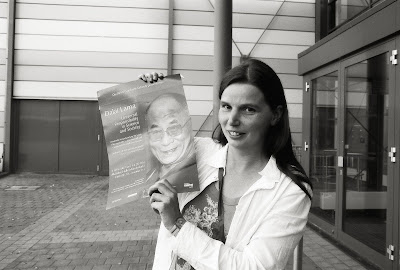 We waited still. In a while a door opened and out walked 2 young girls. Through the lobby and out the glass doors. Anja looked at me and asked " Should I ask them for their tickets?" Of course! The girls looked startled, but I didn't know what was being said- i don't speak any german. The next thing I saw was the girls handing tickets to Anja and Anja is giving them 5 euros.


Now, with tickets in hand, we marched back up to the guards and handed them over. They said "Nein" again. and although I couldn't understand I knew what was going on. These tickets had already been used. Anja's face dropped. She was clearly devastated. She said Oh no! this cannot be! We turned to leave.


Then the guard got a new look on his face and said Ok. Come in. But you must be very quiet. Of Course! we said. Anja put her arm around me and we were escorted in. 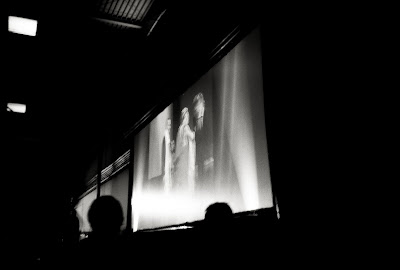 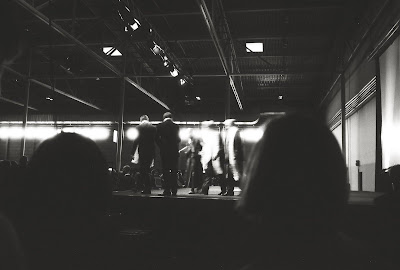 I saw the Dalai Lama speak to almost three thousand Germans, in English, with his Tibetan interpreter. Incredible.

Afterwards we walked around the old city of Munster, 15th century old. I tried to take it all in but we were so dazed, i guess is the right word, from seeing the Dalai Lama, we left soon after. 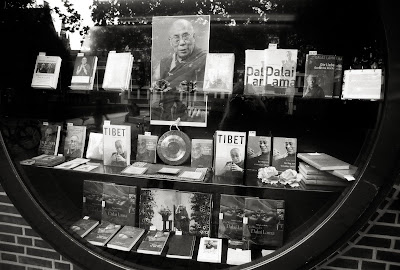 A shop in old town of Munster. 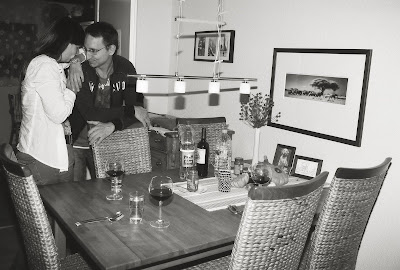 Anja and Christoph at home. Christoph stayed home with baby Mila while we went to Munster. And then he had dinner waiting for us. With wine. And candles. 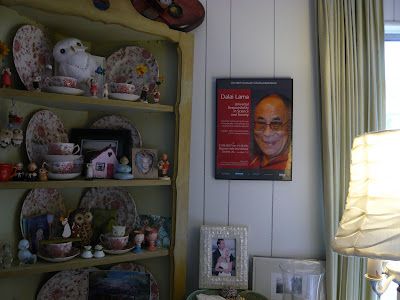 Back home. And here is the poster. All the way from Germany. Happy in my Granma Rose corner. And I have met Desmond Tutu, but that will have to wait for another post.