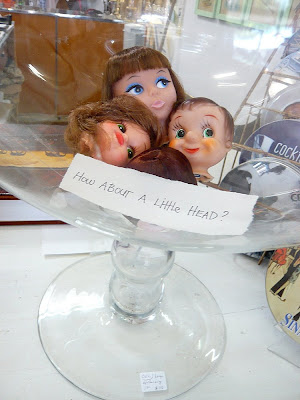 We made a little joke. it was only meant in fun.

There is this certain antique shop, there are several lovely dealers that rent space and fill it with wonderful things that they've collected. Then they carefully and lovingly arrange all their things into an tasteful, artful, display.

sometimes, something like this comes along. a large glass vessel which must have seemed too lonely with nothing inside so the creative antique dealer tossed in some little doll heads to fill the void.

i saw it. did she not? what is wrong with me, thinking such things.

then, my friend jon comes in, looks at the jar and says it. How bout a little head? hahahahahahaha! oh hey, I'm not alone. Jon says "i'm going to make a sign and stick it on there!" i say "oh no!" he says "i'll do it with my label maker, that way no one will know who did it".

But he doesn't' come back. so i, who really should know better, make a sign and i do it in jon's writing. then i photo my deed and email him, with the subject saying : Look what you did.

Of course he finds this hilarious and says leave it. so i do.

later...owner of jar comes in and demands "who did this?" dealer in shop says, "its jons writing but he says he didn't do it (he didn't right?) and lori would never do it! jon overheard this while busying himself in his space, trying to suppress giant laugh.

so owner of jar crumples up sign, clearly not seeing the humor.

and the best part...

the mystery remains.
Posted by Lori ann at 10:21 AM